The results of the study, which were presented at Parliament on 30 June 2020, found that by working directly with perpetrators of family violence, Gandhi Nivas was able to prevent almost 60% of the men who have taken part in the programme from reoffending.

She says: “The team’s evaluation provides insights and data on the success of the Gandhi Nivas programme, and offers hope that properly resourced early intervention can contribute to addressing our very real problem of violence in our homes."

The Gandhi Nivas programme, which is partially funded by ACC, provides emergency housing and counselling to men who have been issued with a Police Safety Order (PSO) following an act of family harm. Participating agencies describe the initiative as innovative and ground-breaking.

Once a man is issued with a PSO, he must leave the family home for a set period of time. It’s at this point that some men are taken by Police to one of three Gandhi Nivas homes in Ōtāhuhu, Te Atatū and Papakura. This immediately decreases the likelihood of further family harm, increases safety for the family, and provides the offender with an opportunity to begin the process of behavioural change.

Addressing the complexity of family harm

Police Deputy Commissioner, Wallace Haumaha says “This research demonstrates that by providing immediate support alongside early intervention for the perpetrator, victim and whānau, we can address the complexity of family harm,” he said.

Ranjna Patel, the founder of Gandhi Nivas, says the Massey report’s findings provide a compelling proof of concept for the interventionist model.

“If you want to see transformational change in this country you have to work with the men who are inflicting violent behaviour in the family home. It’s important to support the victims of domestic violence, but that won’t change a man’s behaviour. To end violent behavior, you’ve got to find and address its source.” 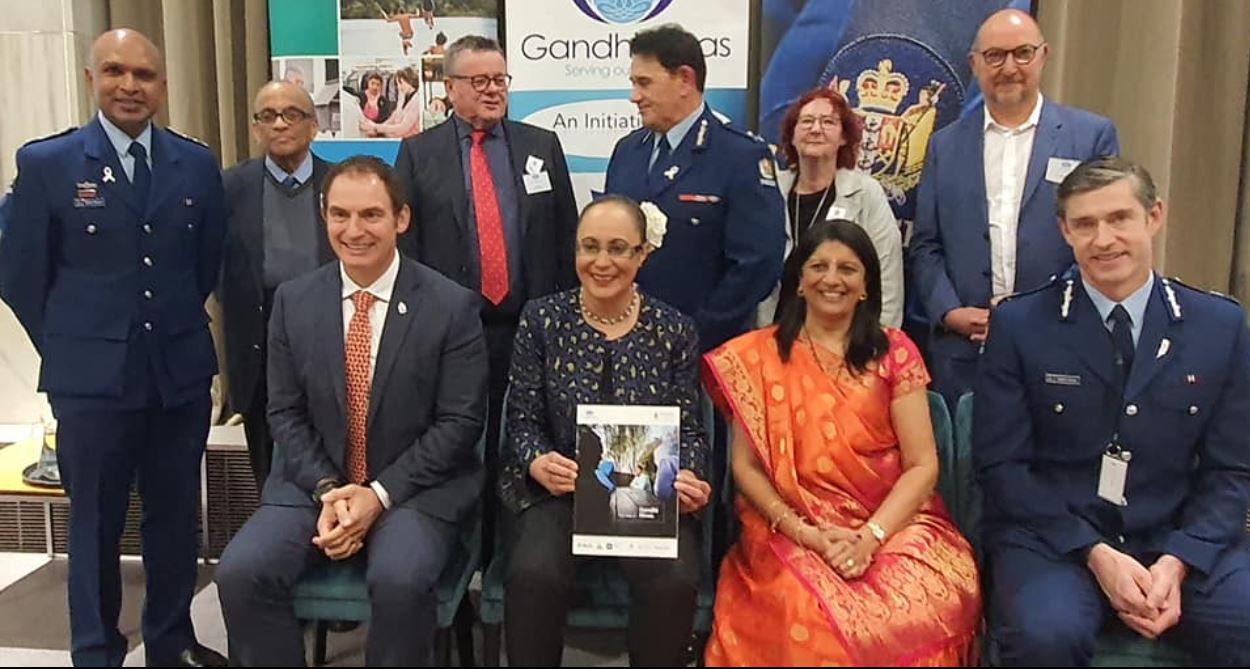 Gandhi Nivas on The Project NZ

Banquet Hall – Parliament. The launch of the Massey University report 2020

Gandhi Nivas was excited to be invited by Governor General Dame Patsy Reddy to visit her at Government House in Auckland to talk about its work to prevent family harm.

Founder Ranjna Patel was joined at the visit on the 8th of August by those who helped establish and support the project, including representatives from Total Healthcare PHO, police, Sahaayta Counselling Services and Massey University.

Ranjna says it is wonderful that Dame Patsy showed such a strong interest in the work of Gandhi Nivas and its unique way of helping prevent harm by providing early 24/7 help to support families. 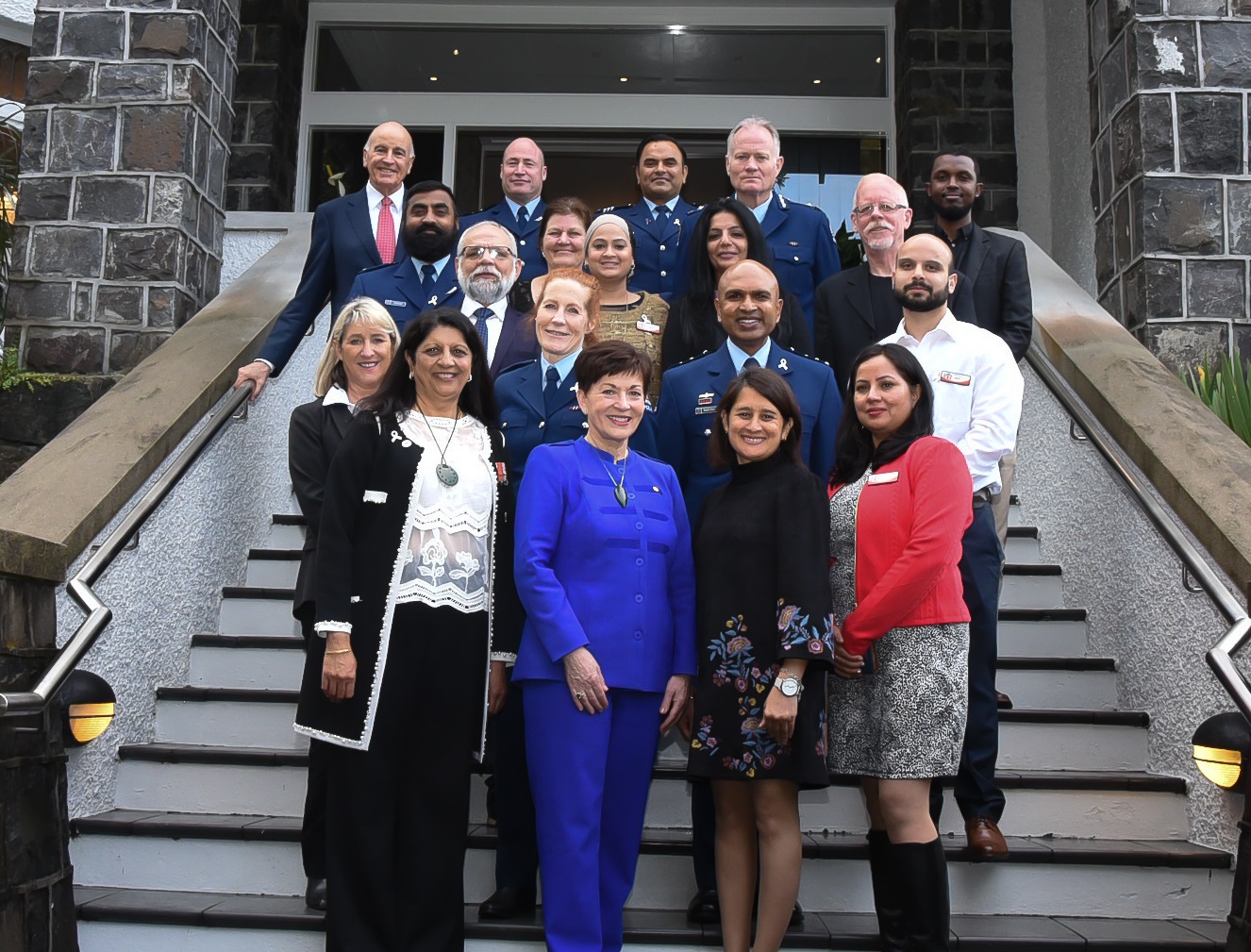 December 2018 marks the four-year anniversary of Gandhi Nivas and its work to prevent family violence.

Founder Ranjna Patel paid tribute at anniversary celebrations to everyone who had put in “the hard yards” that led to the success of Gandhi Nivas, especially the “true heroes” – police and Sahaayta Counselling.

Gandhi Nivas has helped more than 1100 families through its first home in Otahuhu. Two new houses opened in Auckland this year – the Te Atatu house has helped 190 families and the Papakura house 65 families.

Overcoming the behaviour patterns that lead to family harm are difficult and the work police in Auckland put into making sure its officers are aware they can refer people to the services Gandhi Nivas offers is vital, Mrs Patel said. She noted when men are referred to Gandhi Nivas for counselling and emergency housing, staff also offer support to the women who have the courage to call police.

Professor Mandy Morgan from Massey University’s School of Psychology spoke about the research projects under way on Gandhi Nivas. Changing behaviour is a long and ongoing process and Gandhi Nivas provides support when men are ready and want help, Professor Morgan said.

Women who have been interviewed for research projects speak about how vital it is they can get support from Gandhi Nivas 24/7, seven days a week, and that helps give them strength to endure their family’s crisis, she said. 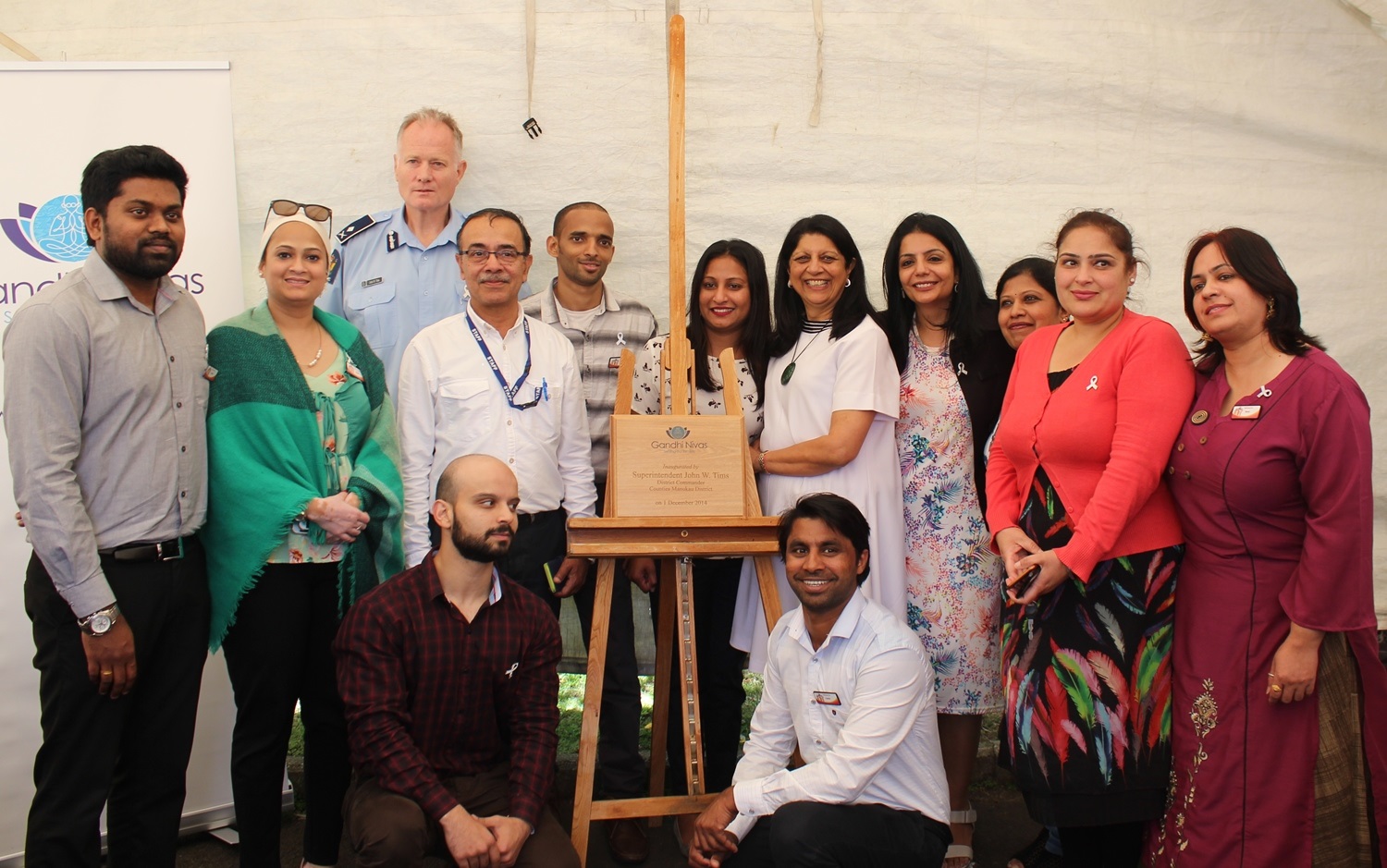 The third Gandhi Nivas house has been officially opened in Papakura by Manukau East MP Jenny Salesa, Minister for Ethnic Communities and Associate Minister of Health.

At the 7 September opening, the minister spoke of her strong support for the work of Gandhi Nivas in helping to prevent family violence. Counties Manukau District Commander Superintendent Jill Rogers said the ability of police in Auckland to refer people to Gandhi Nivas made colleagues across the country jealous.

The Papakura house has been dedicated to the late Vivek Varma, husband of Sahaayta Counselling & Social Support manager Sucharita Varma, in honour of his contribution to Gandhi Nivas. 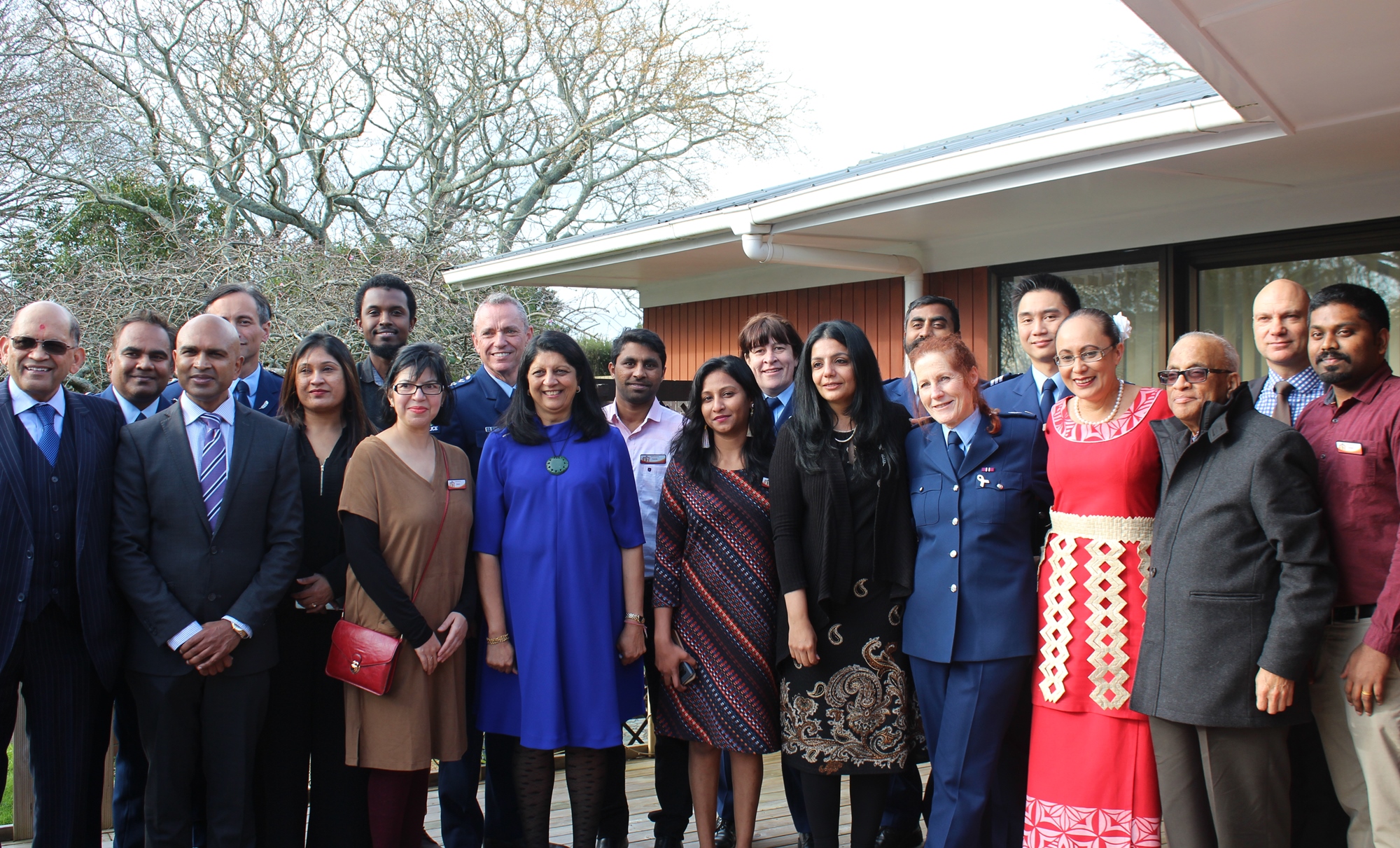 Early results from the first Gandhi Nivas house show a substantial reduction in the number of men offending after intervention. The funding helps address the gap in available services for perpetrators and wrap-around services for families. Gandhi Nivas also receives funding from MSD, Total Healthcare PHO and through donations. 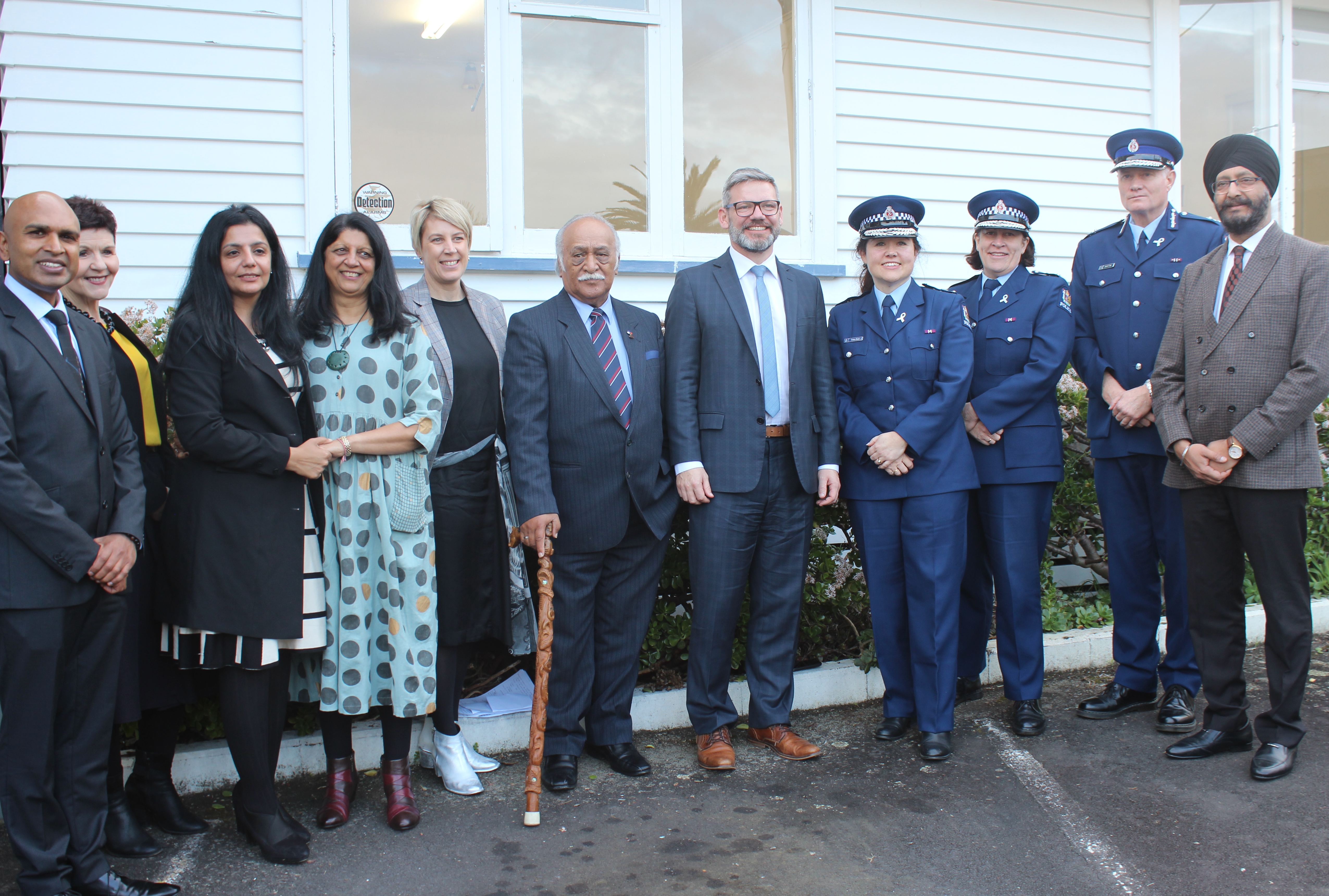 Gandhi Nivas and Sahaayta Counselling & Social Support have signed a new agreement with NZ Police to reflect their expansion in Auckland.

The first Gandhi Nivas house opened in Otahuhu in 2014. The second house opened in Te Atatu in March 2018 and a third house is due to offically open in Papakura in September 2018. 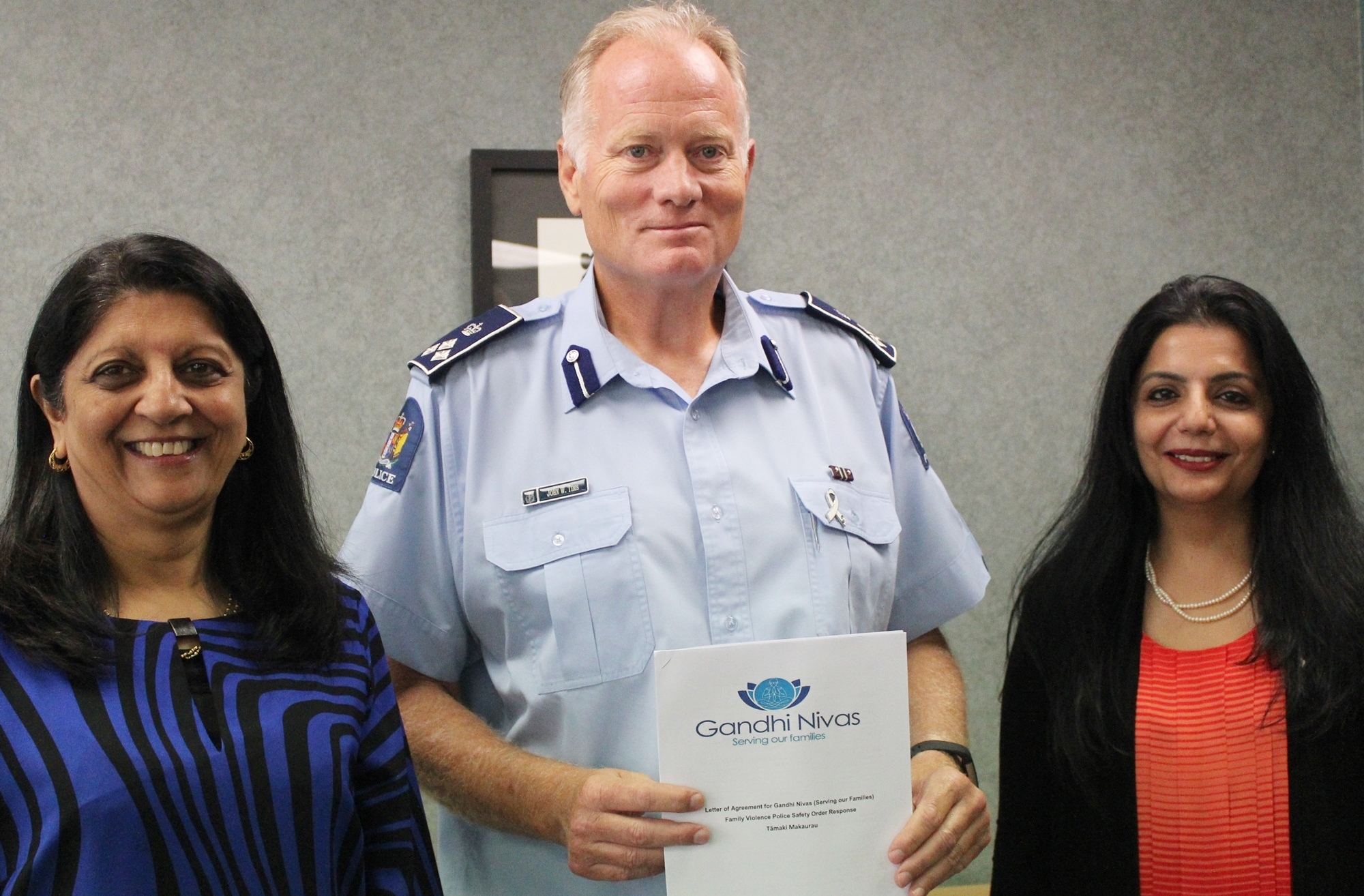 Gandhi Nivas founder Ranjna Patel has received numerous honours in recognition of her work to provide counselling and emergency housing for men to reduce family violence. 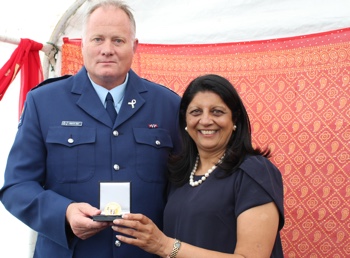 A study of a pilot programme that sees men instead of their victims leave the family home and seek help has been conducted by researchers at Massey University. NZ Herald reporter Kirsty Johnston reviews the results. Her story is here.

A major five-year study by Massey University, which was presented at the Parliament this week, has revealed that Gandhi Nivas’ interventionist model, where it works directly with perpetrators of family violence, was able to prevent almost 60 percent of the men who have taken part in the programme from reoffending.

Homes of peace live up to name

A five-year Massey University evaluation of Gandhi Nivas has found that nearly 60 percent of offenders did not reoffend after the intervention.

The community effort and teamwork that went into this achievement were celebrated at a reception launching the report at Parliament this week.

Research into a domestic violence programme shows that by removing the perpetrator rather than victims from the home and offering them housing and counselling, almost 60 percent didn't reoffend. Massey University conducted a five-year study of the Gandhi Nivas programme for men committing family violence who are referred to the service with a Police Safety Order.

A family violence programme that removes men from the home, rather than their victims, has been shown to reduce offending by nearly 60 per cent over five years. Joining Lynn to talk about Gandhi Nivas and the research into it is Dr David Codyre, Professor Mandy Morgan of Massey University and Inspector David Glossop.

Figures from Massey University show over the past five years, 57.5 per cent of men who used the Gandhi Nivas interventionist programme did not re-offend or commit further acts of family harm. It focuses on working with male perpetrators, removing them from the family home instead of their victims. Its founder, Ranjna Patel, believes it’s important not to uproot those on the receiving end of the violence.

Gandhi Nivas is an organisation helping to prevent family harm in New Zealand. The words themselves symbolise a ‘home of peace’, and this is what the organisation offers to men who have been involved in family violence and need a safe place to stay.

A violence programme that sees men - instead of their victims - leave the family home and seek help has been found to prevent further offences in two of three cases. Kirsty Johnston reports.

New Zealand Police recognises leadership efforts by Gandhi Nivas in filling a critical gap in the family violence cycle experienced by a large number of Aucklanders.

Ranjna Patel reflects on how and why Gandhi Nivas was established.

We need a lot more Aunty Ranjnas in New Zealand

'Aunty Ranjna' Patel is a champion for high-needs communities in South Auckland and the first ethnic woman to become a finalist for New Zealand Entrepreneur of the Year.

One year since it opened, an early intervention family violence facility set up by the Indian community in South Auckland, is being used as an example for other communities around the country.

A 'house of peace' is celebrating its first anniversary - and confirmation that it's helping to cut family violence. Gandhi Nivas, a residence for men issued with police safety orders, has accommodated 103 men since it opened.

A new approach to domestic violence, which sees men removed from the family home rather than women, has had good results in New Zealand.

Healthcare and philanthropy in Auckland

Ranjna Patel and her husband are at the helm of an Auckland healthcare empire and they've used some of their success for philanthropic projects, including tackling domestic violence.

A new initiative by Auckland's Indian community is claiming a 90 per cent success rate for preventing domestic violence.

'Don't take the women and children out of the home – put the man in a safe place instead', is the philosophy of Gandhi Nivas – a family violence facility in Otahuhu. The first centre has been so successful a second will open.

Police back scheme offering time out for family violence offenders

A senior police officer has praised a 24-hour service helping the perpetrators of family violence, saying it has reduced the workload for officers.

In a who’s who of the great and the good, Ranjna Patel’s second shelter for perpetrators of family violence was officially opened yesterday in west Auckland.

An organisation which provides support to domestic violence victims and the perpetrators has been given a $1.7 million funding boost.

Service that helps abusive men calm down gets $1.7m

Houses that give abusive men barred from the family house somewhere to go are getting $1.7 million from the Government.

Gandhi Nivas – the early intervention service that provides emergency accommodation and counselling for perpetrators of family violence – has received funding from ACC to support their actions in the community for the next three years.

Counties Manukau South Police officers are putting in the hard yards to give back to the community and help Gandhi Nivas to open a house in Papakura.